Aspire® concrete honoured at The Urban Developer’s Awards for Industry Excellence, a celebration of the best of urban development in Australia and New Zealand. 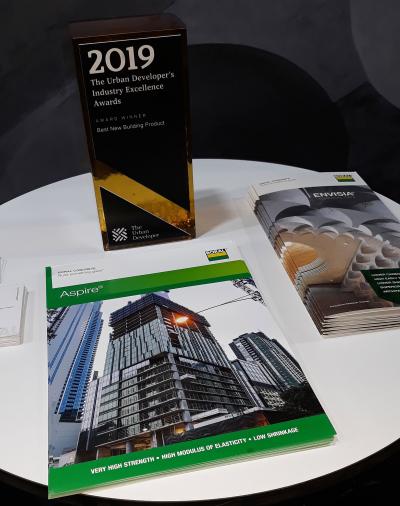 Boral’s leading Aspire® concrete has been recognised as Australasia’s Best New Building Product of the year at The Urban Developer’s Awards for Industry Excellence.

The awards celebrate the best of urban development in Australia and New Zealand and were presented at a gala dinner at Howard Smith Wharves in Brisbane on October 23 as part of The Urban Developer’s two-day Urbanity event, a conference for property and urban development leaders, planners and architects in the Asia Pacific region.

Upon being presented with the award, Boral and the audience were told it was impressive a product that added value to the construction industry had won the category.

Aspire can push the concrete’s capabilities to achieve premium engineering performance rather than accepting existing standards and conventional approaches in concrete construction.

These qualities resulted in Multiplex selecting Aspire® for its 80-storey The One residential tower at 300 George Street in Brisbane.

“We are extremely proud of the work of our Queensland concrete team’s technical and production expertise,” Mr Jeffery said. “They have worked tirelessly to find a solution for Multiplex and its innovative building design.”

Multiplex Constructions Design Manager (Engineering), Matt Irwin, said the tower presented challenges in the design and construction of the core walls and mega columns due to its height.

Mr Irwin said to avoid cracking over time in the walls, ceilings and slabs Multiplex had to look at unconventional methods.

“It was not feasible to increase the stiffness of the columns conventionally as the increase in reinforcement and/or concrete strength that would be required was insurmountable,” he said.

Pre-setting or raising the columns and slabs at each level by the amount expected in differential movement had been used in the past, but it would add complexity, time and cost to the build and risk to the design of The One, Mr Irwin said.

“By adopting a pre-setting method it was expected to add an additional day per floor for the extended forming durations as well as the certification, amounting to an additional 76 days overall at an estimated cost of $2.3 million,” he said.

“By adopting Boral Concrete’s high stiffness Aspire® mixes, Multiplex was able to substantially mitigate the risk to finishes from differential shortening as well as reduce the risk to program,” Mr Irwin said.

Boral also worked with placers East Coast Concrete and design consultants Hera for the selection of Aspire® as the optimal solution for the tower.