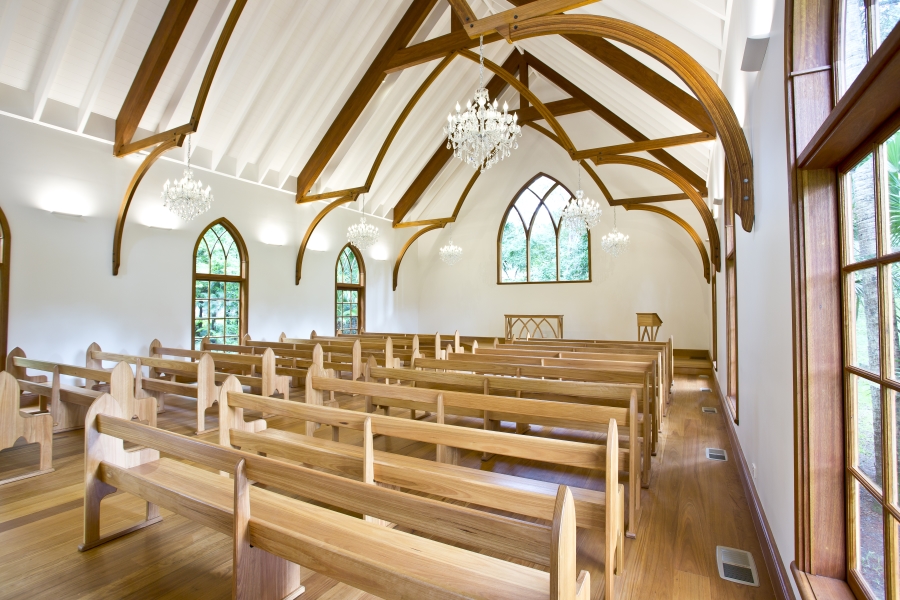 Constructed in the 1960s, Kantara House was renowned as the most sophisticated wedding venue on the NSW Central Coast. The venue had since become run down and dilapidated, until Cherie Reid and her family purchased the property in 2014. Over the course of two years, the property was restored to its former glory and the beautiful Charlotte Chapel was built. The chapel is a celebration of the owner’s love for Australian hardwoods, showcasing sustainable , handcrafted timber throughout the structure and interiors.

Cherie was determined to utilise the rainforest setting, believing that the surroundings would serve as the perfect backdrop for happy newlyweds. The chapel takes its design cues from a similar building located on Hamilton Island, however very much incorporates Reid’s own unique vision. “I wanted it to look like a small chapel, but for it to actually be quite big. It holds 140 people seated with plenty of standing room,” commented Cherie.

Her brief was very specific and drew upon her passion for sustainably sourced Australian timber. As a result, the primary species used was Blackbutt from Boral Timber. The chapel was built by Chris Graves from Chris Graves Building, who found the project to be a once in a lifetime opportunity.

The elliptical windows were handcrafted from Blackbutt timber. The doors were also custom-built using Blackbutt to mirror the elliptical shape of the windows. The flooring was 180mm tongue and groove Blackbutt, filled with more than 4000 wood plugs that Reid customised herself. The grand 45-degree pitched ceiling showcases bespoke, recycled 100-year old Blackbutt curved beams.

An outstanding feature of the chapel is its 16th century bell, personally sourced by Cherie from England and restored for its original use. The bell was cast in 1550 and is the oldest ringing bell in Australia. The bell tower is also made of Blackbutt species, custom-built on site.

The construction wasn’t without its challenges. As the chapel was built at the bottom of a valley, the water table was only 700mm below ground. “There was so much moisture in the area, you had to treat the chapel like a boat,” Graves commented. In order to accommodate for this moisture and potential flooding, additional expansion was allowed for during installation.

The chapel was of an enormous scale, each rafter was almost 9m long and had to be craned onto site. The height from the floor to the apex of the roof is 8.5m. “It was like building a doll’s house except a hundred times bigger. We had to build a scaffold internally in order to safely construct the ceiling,” said Graves.

Both Cherie and Graves noted the instrumental work of retired joiner Ian Graham, who custom designed and handcrafted the pews, stage platforms, lectern and altar using Blackbutt timber. “He was quite magical, the chapel wouldn’t be what it is if it weren’t for him,” praised Cherie.

The chapel is a testament to the dedication and efforts of each person involved. “You don’t get to apply your trade to this level of finesse very often. This was the ultimate project, we were afforded plenty of time to make it perfect,” commented Graves. “It was amazing to be able to do my job to the best of my ability.”

Charlotte Chapel won at the Australian Timber Design Awards, in the Australian Certified Timber category. The venue has now hosted hundreds of weddings, and guests continue to admire this celebration of Australian timber.

See Boral's full range of Timber products for your next Project