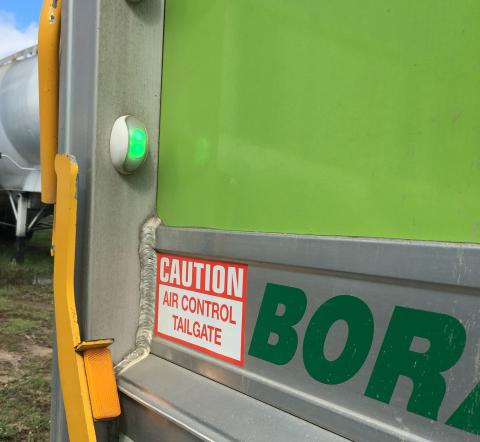 A new indicating system using green LED lights has been introduced to help drivers confirm the position of the tailgate lock before elevating their tipper bin to discharge their load.

The lights were engineered, designed and tested at Boral’s logistics hub in Wacol, Queensland, in 2016. The Boral team worked closely with automotive electricians to develop the lights that are positioned near the steel handles and triggered by a proximity sensor.

“One of the issues here is that traditional mechanical indicator way down the back of the truck can be very hard to see via the driver’s door mirror, especially in poor light conditions,” Mr Rowlands says. “This is usually just the original manual lock handle that protrudes out the side of the tipper bin. The door locks are actually pneumatically actuated from the truck cab.

“The result is that the bright LED is extremely easy to see in any light situation. It gives the driver far more confidence that he knows the actual position of the tailgate locks, and serves to remind him to open it before tipping the load. The drivers love it – one driver said it was the best thing they’ve seen in 30 years of driving tippers.”

Further trials are also being conducted with a similar red LED light that starts flashing when the tipper trailer is at more than a certain amount of cross-slope. This is to alert the driver of potential instability and the danger of tipping off in that situation.

Cement Concrete & Aggregates Australia awarded Boral with its Queensland Health & Safety Innovation Award for the invention in 2017. The industry body again recognised Boral at its biennial national awards with a highly commended award in September 2018.