Graham Daunt worked in the asphalt industry for more than 20 years. Today, his son Jason and his granddaughter Jasmin work in Boral’s asphalt business in Queensland.

Jason is our Manufacturing Supervisor for the Ipswich and Trade Coast asphalt plants and Jasmin is Boral’s Weighbridge Operator at Whinstanes.

Jason fondly recalls spending Saturdays with his Dad on job sites when he was four or five years old.

“Sometimes I was given small jobs to do. At a church car park job, I remember being asked to sweep the gutters. I thought it was great.  At the end of the day, the boys all chipped in $1. With about $8 in my pocket, I thought I was the richest kid around”.

Following in his dad’s footsteps, Jason joined Boral Asphalt’s Whinstanes operations in 1989, as a fresh-faced 17-year-old, straight out of year 12. He spent nearly two years working in the lab before leaving to pursue other opportunities. Returning to Boral nearly 20 years later to join the Asphalt team as a Company Quality Representative, Jason has recently celebrated 13 years at Boral.

Reflecting on his time in the asphalt industry, Jason says the biggest change he has seen is improvements in safety. ”There has been an increased focus on ensuring that everyone is always safe. I think the shift to long clothing is the best move that the industry ever made.”

In April this year, Jason’s daughter Jasmin became the third generation in her family to work in the asphalt business. Having just finished high school, she was encouraged by her Dad to apply for a job opening as Weighbridge operator at Whinstanes, where he had started almost 30 years earlier. “I am confident that she will be able to do well and that Boral offers a good, safe environment. It is an industry that has looked after me over the years and I’m confident it will do the same thing for her,” said Jason. 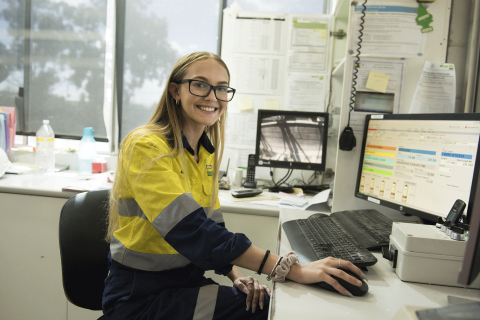 For Jasmin, while working in the asphalt industry was not something she had planned, she is enjoying being part of the team at Whinstanes. “It has been a big change but so far it’s been really rewarding. My team are very welcoming and supportive,” she said.

She would love to see more women working in the business and hopes she can help break down stereotypes and encourage others to join. When asked how she felt about following in the footsteps of her father and grandfather, she replied, “it’s fantastic being the third generation at asphalt and having that family tradition. It would be great if my sister also joined!”